Long ago in a world far, far a away in a magical time place called the 90’s, when the internet was a magical place. Blogger was the first blogware around. Blogger was still it’s own type of company and even Google wasn’t a twinkle in the eyes of a couple of high school kids trying their hand at musical piracy.

In 1997, I had a blog.
Over the years, I’ve kept a blog in one form or another. Never really committing to it. I’d get excited for a while then take a fukitol and quit it. Over the last few years, I’ve actually kept up with it.
I’m also pretty happy with Movable Type now. I was on Textpattern for almost four years. It’s a good blogware, but after a while I wanted something different. Something a little more. That’s when Movable Type revamped themselves and went OpenSource.
I was till leary of WordPress. I tried WordPress years ago and it the backend made my eyes cross. It was to much at the time. I do have a site that runs WordPress and it’s good. A lot better since it went 2.5. I almost would choose WP over MT, since WP runs fast than MT. MT was being a dog with it’s 4.1 and just taking to much cpu power. Now with 4.2, it runs faster, looks better.
WP is still faster, but I like the feel of MT.
Anyways, I guess that makes me an OldBlogger. And here is the obligatory stupid pseudo-gang sign photo. 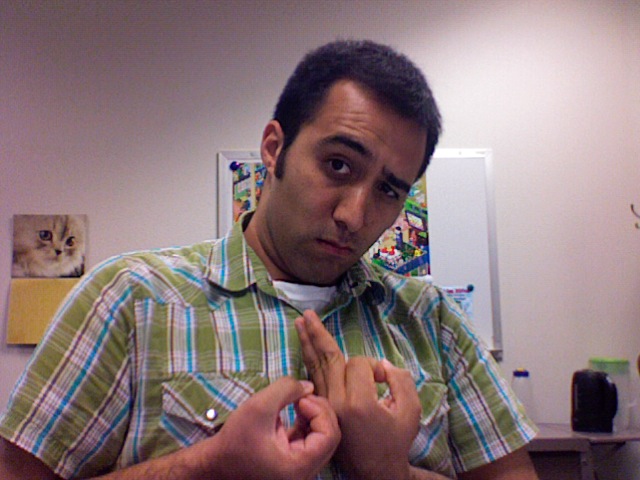