I have no clue what it is about this particular apartment complex, but the worst DUMBEST assholes seem to live there. About once every six months you get someone who could park to save their own lives. This is a Saab owner who must have been so fucking thrashed that they appear to damaged their rear axel.
I can’t say that I’ve been the best person to park, but c’mon, look at the images. This ass just fucked the parking up bad. When I saw the car, I broke out my cell phone(sorry about the lens flare) to take a shot of it. A cop was already there, just waiting for the shmuck who parked on the sidewalk with a broken car. He thought it was mine.
“Is this car yours?” His hands were in the typical cop position; one on the mace, the other on the service gun.
“I’m not that big of dumbass,”  honestly, it could sound like someone who was denying it was their car. Really, I’m not that big of a dumbass to to that to my own car. I’d be weeping about it. I’m broke as it is, I don’t want that sort of hell. The cop, who looked to be younger than the last turd I took, asked again and I had to answer no, I just wanted pictures of what that dumbass had done to their car.
The only regret, and there are two to this; I wish I had the cop pose England style with the car, and I had worn the Luchedore mask while taking the photo. 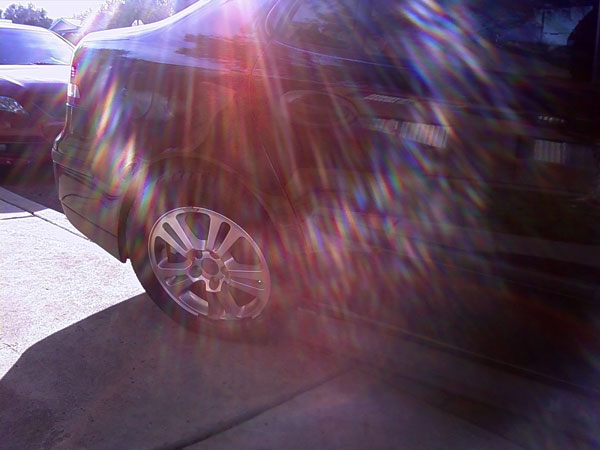