There are times that seeing Joan Rivers has me on the edge of my seat waiting for the moment she rips her mask off and show that she has been one of many women to play Rivers. A Dread Pirate Roberts of women comedians, where the original Joan has been living the last 30 years on an island in the South of France. That this entire time the look of heavy plastic surgery was to disguise when a new one came to take over the previous Joan Rivers. Each one hand picked to carry on this tradition of comedy and fake plastic surgery where you have to wonder if Joan where to smile, would her nipples poke out of her shirts/dresses. 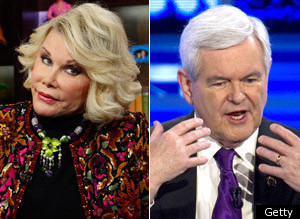 The picture accompanied Newt, and there wasn’t a need for actually editing the image so don’t look too far as to who I think would be under the Joan Hood.