Here are two more that were purchased from eBay along with another one that had a crap photo. Lucian had complained about the lack of ships to go with his figures. Now he has ships. Lots of ships. Which is cool. I think that means we’re going to be playing outside.

Since most of these things are eBay things, I can end up taking photos of everything later when he’s at school. Which will be fun for me since I can show you what he’s getting and later after his birthday party, watch him play outside with his starships. 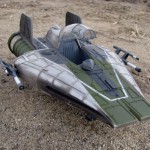 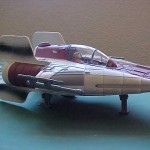